Myspace, Data Migrations and the Rise of the Digital Blackhole

An Open Letter to Tom Anderson
(co-founder of Myspace)

You were my first internet friend. What happened after you left Myspace? What did they do to your baby? The Myspace data disaster made many of us sad, sad, sad. How did we come to the point where the organization you created somehow “lost” 53 million songs recorded by 14 million musicians? Seriously? 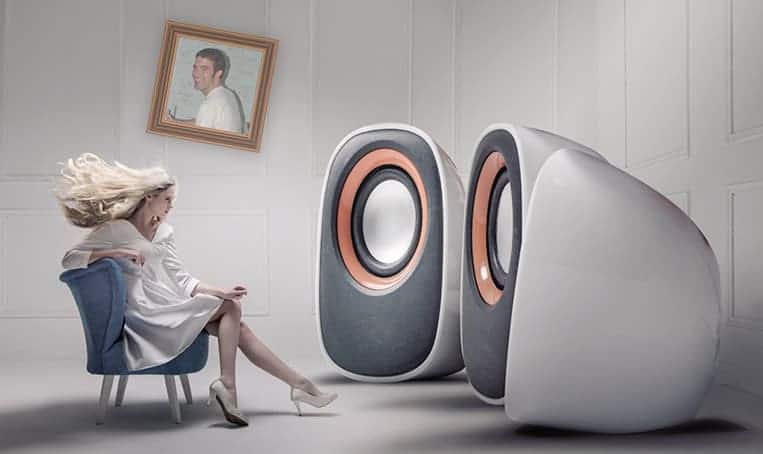 We have all grown up a bit since the early 2000’s when we visited Myspace regularly and posted up our band’s latest song with the hope of getting traction for our upcoming gig in St. Petersburg, Florida. Now we are adults, with full-time jobs, mortgages and kids. Some of us work in the technology field now and can’t help but wonder what went wrong.

You left Myspace in 2009, so we don’t blame you for this. (In fact, many people are now wishing you had never left.) Losing all the songs uploaded to Myspace before 2015 is a bit of an issue. There are probably bands that considered Myspace their personal Dropbox account. Heck, Dropbox didn’t even exist back then, so you were cutting edge. All the cards were in your hands at one point and things were fine. What went wrong after you left? Did you forget to tell the new guy not to lose the music?

Myspace IT and Tech Support — How Not to

Actually, the first news on this problem started surfacing around seven or eight months ago. We checked Reddit and Twitter and saw the early signs that something was amiss. This became a trending story again recently, and it brings home the very real pain points associated with technology when it is not meticulously or fully applied. I’m talking about the data migration of Myspace content, our music, to some other platform.

The current support team even claimed they could fix it (after they broke it) months ago. Great! So, we held on to our dreams of clicking on the links to our music and having it play. We believed in Myspace — we were still users (well, some of us were), despite the ridicule we faced from our co-workers.

How Myspace Should Have Gone About Doing Their Data Migration

Tom, your Instagram Photography stream is great. Keep up the good work. Let’s hope the team running Instagram learns from Myspaces’ mistakes and makes sure nothing like this debacle happens with their user’s data.

We (LinkTek) are in the data migration business and have been for over 15 years. We have helped major companies, government organizations, and many others move tremendous amounts of data to the cloud, to new servers, to SharePoint, and everything in between.

So, let’s go over a couple of basics. The first broad action in any migration of this magnitude is to plan the migration. Anyone doing a major migration needs to understand what they are moving and what systems such a move may affect. You must identify the files are you moving and how those files integrate with other files in your system and server/application environment.

Continuing to cover just the broad strokes here, the second major action is to ensure that you have a reliable backup of the data that you are about to migrate. That way, if something goes wrong you have a working copy of your original data. But this reminds us of the old “experiment” of Schrödinger’s Cat — the idea that if a cat is put in a box with a toxic chemical, you will only know if the cat is alive or dead by actually looking in the box. In a similar fashion, Schrödinger’s Backup is the idea that “the condition of any backup is unknown until a restore is attempted.” 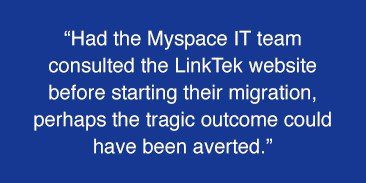 Waiting until you actually need your backup to find out, for the first time, whether or not it fully works, is not a good idea. It’s much better to conduct a test restore of your backup before moving or renaming the first file or folder in your project. This is covered in the article, “ 3 Common (and Dangerous) Data Migration Mistakes”. Had the Myspace IT team consulted the LinkTek website before starting their migration, perhaps the tragic outcome could have been averted.

What Happened at Myspace?

This is where we need to really talk about the Myspace you left, Tom. As of press time of this article, the powers that be at Myspace haven’t publicly revealed the details of exactly of what went wrong during their data migration attempt. But it seems an inescapable conclusion that whatever went wrong, Myspace must not have had restorable backups. Whether their backups were corrupted or they had none in the first place, we don’t know. But it seems very safe to say that they had no restorable backups on the day they were needed most. The fact is that the IT team at Myspace should have made a backup of all the data prior to the migration and should have tested it thoroughly before beginning their project.

The above basic data migration facts are known and are a part of the best practices for anyone doing this sort of massive data transfer, whether from one server to another, or from a server to the cloud.

Obviously, there are issues that are unique to each migration. We at LinkTek specialize in protecting and repairing the file links within the most common file types. For example, this means your link in an Excel spreadsheet to another Excel spreadsheet is safeguarded and won’t break when you make the move. Lacking the details, we don’t know the degree to which broken links played a role (if any) in the failure of the Myspace migration, but we have some hard-won experience in the migration arena, which leads us to this very blunt question that some Myspace users may be asking themselves:

Did Myspace Intend to Do a Migration or to Just Dump the Files?

What doesn’t make sense about this whole thing is that if they were going to do a data migration of this size, they would have planned for it, made sufficient backups, and taken into consideration the system they were moving from and to… Right?

We dug into some Reddit threads as well as some past Twitter traffic on the subject of Myspace’s data loss. It didn’t look good. 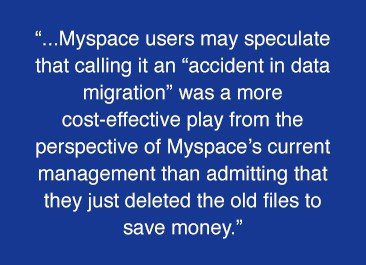 At one point, back when this started eight months ago or so, the Myspace support team claimed they understood the missing data problem and were resolving it. Then the story started to change. They said that they couldn’t support FLV (flash) files because their player was updated to HTML5.

We can make a pretty educated guess that the majority of the files that were lost or corrupted during the data migration were likely MP3 files. Is this because the current Myspace organization couldn’t be bothered with working with this older file format while moving to a new system? Or is it something else? Perhaps the cost to migrate 50 million MP3 files to the new system just wasn’t worth the effort (including the time to fully backup and fully test the backups before starting the migration)?

While we don’t know, we can’t ignore that some will ask such tough questions. Some Myspace users may speculate that calling it an “accident in data migration” was a more cost-effective play from the perspective of Myspace’s current management than admitting that they just deleted the old files to save money. As tempting as this position may be — and it is plausible — the more likely explanation is that this was a case of a botched migration accompanied by a failure to ensure there were restorable backups.

The Future of Data and the Looming Blackhole

Ok, Tom, we don’t personally hold you responsible for this. Heck, you are in a very deserved retirement — love the pics from the Maldives by the way, awesome.

But we need to talk about the 800-pound gorilla in the room.

First off, you are a bright guy — one of the first to really put a footprint on the internet, before anyone knew where it was going or what it was going to be. Getting in trouble with hacking banks at 14? That’s pretty punk rock.

Can we work together to fix the digital archive process for the masses? That is really what this is all about. With the constant changes in hardware, software and file formats, it is damn near impossible for organizations and consumers to keep up.

This sort of thing is going to happen more and more and affect individuals’ digital memories (photos, videos, music).

Maintaining the integrity of your digital archives and files is a growing problem. Rapidly changing platforms, software, hardware and file types, none of which are under consumer control, means that individuals need to stay vigilant and up-to-date on a number of things if they want to make sure that their data is safe in the future.

The fact remains that we all need to be more diligent in maintaining the digital data that we want to save for the future. Backups are important and should be checked before the source data is deleted or moved to ensure that the data is there. Consumers need to think like IT departments and have redundancy built into their data archives. Remember, storing something to the cloud is just storing something on someone else’s computer.

We may be looking at a future where individuals will have digital black holes. Giant “broken links” to their past, because technology changed, companies went under and in their ever-increasing busy lives, they just couldn’t keep up.