“Will player 456 please step forward?” If you’re among the 142 million viewers to watch Squid Game within the first 28 days of its Netflix release, you know exactly what we’re talking about. If you haven’t watched it yet, but are planning to, we’re not going to give away anything critical, so feel free to continue reading. Either way, stick with us because we’re headed into Squid territory where we’ll uncover some eerie parallels with data migration.

But before we get into how Squid Game provides important lessons about data migration and file-system projects, let’s digress for just a moment to say a bit more about the show.

The show has been a phenomenon like no other in Netflix history. In the United States alone, between 20 and 26 September, Squid Game ranked as the most-watched show on any streaming service in the country. Netflix estimates that it has generated over $900 million in value, with a cost of $21.4 million to produce. Smart investment, there.

We discovered an eerily interesting connection between Squid Game and a data migration.

We did some basic math with some of the numbers circulating on the internet and were dumbfounded. We invite you to return to the alternate universe that is Squid Game and listen to the distinctive soundtrack here while you’re reading.

Saliva was a key factor in the candy game victory. We do not suggest offering the same to management.

In those first six days following its release in September, Americans watched 1.9 billion minutes of Squid Game. Divide by 60 and that equals 31,666,666 hours of viewing time, which translates into 1,319,444 days. How much is that in years? It’s 3,614 years, which thrusts us forward in time to the year 5635. At an average human lifespan of 76.2 years, that’s 47.42 lifetimes. Holy hell. That’s a lot of screen-time and reflects only US viewers. Take global viewership into account, and the result is almost incomprehensible.

In a very clever move, Netflix also made sure the show was subtitled in 37 languages and dubbed into 34. While Google tells us there are over 7,000 languages in the world today, we were hard-pressed to come up with much more than 25, so kudos to Netflix on that score too.

So, you may be wondering, how the heck do we plan on connecting Squid Game and a data migration? Well, initially, we thought we’d simply — but cleverly — connect the six games in the series with the six steps of a data migration. Then we got a little curious and dug deeper. We surveyed our co-workers to find out what qualities or characteristics they noticed had been necessary for a player to make it through each one of the six games in the show.

That’s where it got almost eerily interesting. Why “eerily interesting”? Well, we already had a list of the six steps of a migration and when we paired those with the surveyed characteristics that were needed for each game, well, you’ll see.

It broke down as follows:

There were a couple of qualities that tied for first place in our survey: 1) the ability to keenly observe and make decisions based on those observations, and 2) the willingness to accept help. In terms of a data migration, the first step is identifying the need for a data migration through keen observation. Whether moving to new on-premises servers or to the Cloud, or from one version of SharePoint to another, whatever your situation is, a migration is a big step. Just like the successful players in this game, the ability to observe and make decisions based on those observations, plus the willingness to accept help, will stand you in good stead.

How often does your senior management say, “We’re looking to spend a bunch of money. Do you guys in IT want it?”

Game 2: The Dalgona Candy Game (Get the “Go-ahead” from Management).

Sometimes, the struggle between IT and the users can feel like a tug of war game.

The unanimous survey winner was the quality of innovation. Zeal came in a close second. How does this equate to a migration? You need the thumbs up from management. In the real world, how often does your senior management say to you, “We’re looking to spend a bunch of money. Do you guys in IT want it?” … Yeah, we thought so. Alright, then how do you win this one? Broadly speaking, take the data gleaned in Game 1 and combine that with a healthy dose of innovation in terms of what’s best for the organization. Add a pinch of zeal when you pitch the project and you should be in the ballpark.

Game 3: Tug of War (Find Out What Your Users Need and Want).

The ability to agreeably take advice without resistance and participate as an encouraging team player seemed to be very helpful in this game. Ego is not permitted to get in the way. In terms of a migration, that translates to interacting with the users to establish what they need and want, not only by the end of the migration, but also during it. Team members contributed to victory by being great team players. They listened and then delivered what was needed. Those same qualities will go a long way to smoothing the road ahead for you and the IT department at this point.

This game required incredible patience and courage to ensure victory. Be patient when drafting the ever-important migration plan. If you need help with this, see our free eBook, filled with helpful tips. During the Marbles game, it was not only patience, but also the courage to make sacrifices for the greater good that spelled the difference between victory and failure. Both are great qualities to bear in mind as you assemble your migration plan. You need to take the requirements of the organization and the users into account. You need to select and assign appropriate team members to specific aspects of the migration. All of that is going to require patience. And anything that doesn’t serve the best interests of the organization should be sacrificed.

If you have concerns about missing data and the inevitable barrage of complaints from unhappy end-users, don’t worry.

In Squid Game, the players have no idea what the game is, nor the significance of the order of play. Fortunately, with the data migration game, you don’t have to suffer that same disadvantage.

In your situation, if something goes wrong, it’s not necessarily “game over,” but more likely that the duration of your game will be extended, so that you can recover. Of course, this will likely necessitate penalties such as working late, missing the deadline, dealing with upset users and generally making your life stressful. (But, hey, at least you have that lovely overtime pay.) 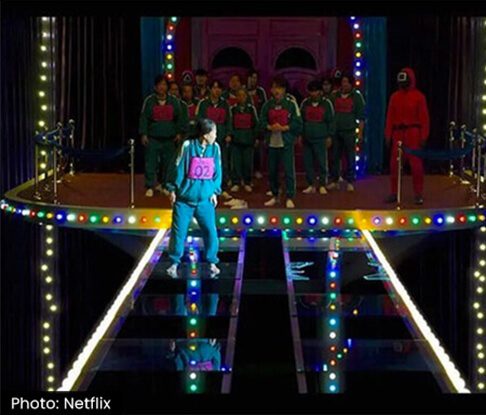 The Glass Bridge: One wrong step and it's "game over." Sounds a bit like a data migration.

The primary qualities that seemed to help players in the Glass Bridge game were patience and keen observation, plus the knowledge and experience gleaned from the previous games. As it turns out, those same qualities are immensely helpful during a large data migration.

In Squid Game, the first five games culminate in the grand finale in Game 6. In a perfect world, if your migration goes 100% according to plan, there should be no need for Game 6, other than some post-migration clean-up. The truth, however, is that the majority of data migrations fail, and one of the most common causes is the file links that get broken during the migration. We hope that all the knowledge and data you’ve acquired results in a migration victory for you and your team. If, however, you have any concerns about missing data, such as from broken file links, we urge you to move on to Game 6, where a solution is revealed.

We’re giving no clues as to the outcome of the final game. All we’re saying is that being a loyal team player and having a sense of humanity apparently count for something. If, however, after your migration you’re bogged down handling file permission settings or dealing with missing data while enduring the inevitable barrage of complaints from unhappy end-users, don’t worry.

As previously stated, one of the most common causes of data that seems to simply go “poof” and disappear is the file links that get broken during the migration. LinkFixer Advanced™ is the perfect weapon against this. Ideally, you’d use it before your migration to ensure that any links that get broken during the migration are automatically repaired, saving you a ton of time and preventing that missing data from occurring in the first place.

“But what if I’ve already completed my migration and have thousands of broken links?” you ask. Well, if that’s the case, you’ve probably got a boatload of data that’s missing, which has the end-users in a frenzy. We can’t directly silence your complaining end-users, but we can help you get those links repaired and that data restored, lickety-split. If you didn’t run it prior to migrating, you can think of LinkFixer Advanced as your disaster recovery tool.

Whether you have hundreds, thousands or even millions of broken links, LinkFixer Advanced can rapidly repair any broken links you may have, consequently restoring that lost or missing data. And it does it fast, which should result in your end-users settling down.

If you want to get the heck off the battlefield and put your feet up, visit LinkTek.com or speak to a friendly Service Consultant at 727-442-1822 for more details on the other way LinkFixer Advanced can be utilized. LinkFixer Advanced ensures that you and your data survive your migration, intact. The cast of Squid Game would approve.