What, you may ask, do baboons, drones and deliveries have to do with data migrations? It’s a fair question, but we assure you there is a connection. Whether you’re prepping for a migration or a system reorg, there are parallels here: some are funny and some are thought provoking, so come along and join us for this ride.

Imagine if a patient was prepped and awaiting an urgent organ transplant, but the delivery service literally got stuck in rush-hour traffic, tragically arriving too late to save the patient’s life. Now imagine a delivery service where neither access nor traffic conditions were ever an issue. It could literally spell the difference between life and death.

It certainly would have come in handy for a gal in our office who went mountain climbing with her brother in South Africa. After a three-day hike into the mountains, baboons raided their camp at night, leaving them with half a cup of granola as the only food between the two of them and a strenuous three-day hike back to the car. What, you may ask, does that have to do with a delivery service, since nobody delivers to the middle of where-the-hell-are-we?

We had Marilyn Monroe, Mickey Mantle plus the other Mickey — Mickey Mouse — and Elvis, but still no pizza-to-your-door.

Enter drone delivery. Undeterred by traffic conditions and requiring not much more than GPS coordinates, that patient’s life could have been saved as an organ-carrying drone swiftly bypassed traffic congestion. And that gal and her brother? Well, they could have taken delivery — even in the middle of nowhere — of some food and happily trekked home. Instead, they staggered back to the car on shaky legs and with cramping stomachs, physically miserable after three days of being chased by baboons across torturous mountainous terrain. (Twenty-five years later and that gal in our office still hates baboons with a passion.) 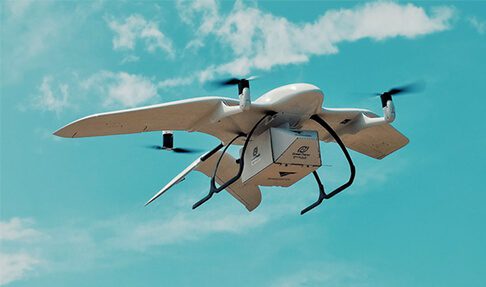 Rapid, contactless delivery of critical medication is made possible with drone delivery.

Delivery drones have not yet become commonplace. If you think they never will, consider that in the 1950s there was no service for the home-delivery of food. We had Marilyn Monroe, Mickey Mantle plus the other Mickey — Mickey Mouse — and Elvis, but still no pizza-to-your-door. By the 1960s, if you called a pizza place, some were starting to offer home delivery. If your local didn’t offer delivery and a bubbling, hot, cheese pie was what you craved, you went to a restaurant and ate one, or you picked it up from the restaurant yourself and hoped it wasn’t cold by the time you got home, or, in a pinch, you settled for the slim pickings from the frozen food section of your local supermarket.

Online orders for delivery didn’t start until 1997, and it was very limited. Today, you can order virtually anything from anywhere (almost) and have it delivered to your doorstep. But when a critical supply line is forced to negotiate through horrendous conditions on the ground, you only have to turn your gaze to the big, empty sky overhead to realize the inevitable is upon us. (It’s a bit like that looming data migration that is square in your sights: inevitable, and, hopefully, not horrendous.)

We’re not likely to see drones bearing familiar company logos whizzing through our skies anytime soon. (On second thought, it depends on your definition of “soon”.) But Brazil is taking bold steps in that direction. The impact of what they’re doing could have far-flung global influence and could forever change the speed with which critical life-saving emergency supplies are delivered. It’s not a huge stretch of the imagination to see how retailers might also turn their gaze to the heavens for a cheaper, “greener,” more efficient way to get consumer goods into the hands of impatient customers. In fact, in 2020 the US Federal Aviation Administration designated Amazon Prime Air an “air carrier” for its proposed drone delivery service. For now, their delivery vans still proliferate and the sky is not yet filled with rotor-powered storks delivering all manner of goods, as Amazon continues to redesign drones and test both the equipment and the process.

Nobody delivers to the middle of where-the-hell-are-we? 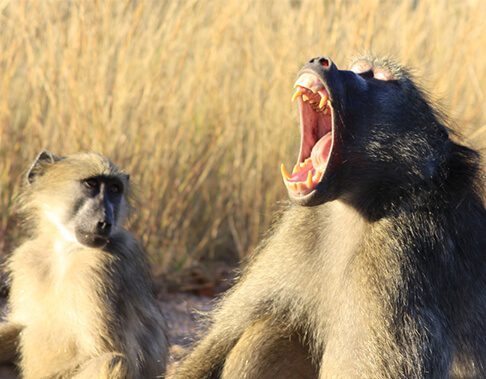 The teeth are just one reason to run from a baboon.

In Brazil, however, Speedbird Aero hopes to soon facilitate home delivery and was the first company in Latin America to gain approval for nationwide drone deliveries, which began in early 2020. The Sao Paulo-based start-up specializes in aerial unmanned vehicles (drones) and logistics, and was founded in 2018 by Samuel Salomão and Manoel Coelho.

Since then, Speedbird Aero has crisscrossed the Sao Paulo skies for its customers, doing deliveries for companies such as iFood, who uses Speedbird Aero’s drone services to deliver food for restaurants and supermarkets. While this high-tech service sounds like pure convenience, it is, in fact, so much more. Brazil currently still has a high Covid-19 infection rate and contactless drone delivery is limiting spread and saving lives.

Recognizing that a one-size-fits-all approach has its limitations, Speedbird Aero developed three different drone models to choose from:

Flights occur at altitudes of around 400 feet (120 meters), with mounted cameras to facilitate precision landings.

“It will take a while for drones to deliver to homes for many reasons like safety, regulations and necessity of infrastructure,” said Mauro Hassan Tanure, mechanical engineer at Speedbird Aero. “What we already offer is a B2B (business-to-business) solution to fill the gap where you depend on a ferry boat or where the traffic is completely jammed in rush hours, for example. It’s not just demos anymore, we already offer a viable and needed solution, but we are still just scratching the surface of what the drone logistic will be in the very near future. The authorities are starting to allow the drones to fly BVLOS (beyond visual line of sight) above cities,” he said.

Imagine a delivery service where neither access nor traffic conditions were ever an issue.

To date, they’ve delivered fresh food, frozen desserts, medicines, household items and tools to users. They anticipate delivery of a wider range of products in the future.

Clearly, drones will fill a growing need in the transportation/delivery industry, no doubt becoming commonplace for home deliveries before long, and potentially saving lives along the way.

Getting from A to B 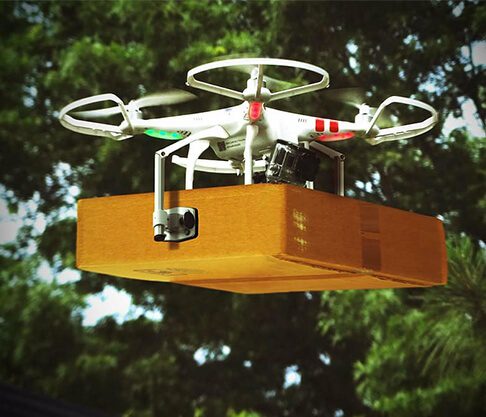 Dinner, delivered faster than by a human in a vehicle.

Next, let’s talk about that data you’re migrating and how to save your life (if it’s your neck that’s on the line). In a nutshell, we’re talking about moving something from point A to point B, much like the goods being transported by drone. Whether you’re migrating to SharePoint, the Cloud, OpenText, new servers or new file structures, you’re probably aware that there’s a risk of data going missing instead of arriving at its destination. You may additionally be aware that one of the primary causes is the broken file links that occur when files get moved or renamed.

Much as drone delivery seeks to bypass traffic congestion or unusual access conditions which may ordinarily impede a regular mode of delivery, it’s critical to avoid downtime, upset end-users and displeased bosses by ensuring your data arrives at point B, unscathed and intact.

Trust us when we say it’s a whole lot easier than designing and building a drone and then jumping through the hoops of getting authorization to enter the airspace in an urban setting. All you need is LinkFixer Advanced, the first-of-its-kind software, designed to make you look like a hero — while it saves you a ton of time.

LinkFixer Advanced: As efficient as a delivery drone? Yes. Faster than a baboon? Absolutely. Putting control of your time back in your hands? You bet.

You only have to turn your gaze to the big, empty sky overhead to realize the inevitable is upon us.